The anonymous Freeway Blogger celebrates the liberation of Iraq and Afghanistan, it's spill-over affects into Egypt, Lebanon, Syria, Saudi Arabia, Kuwait, and Palestine, and the complete paradigm shift uderway in the entire Middle East by mocking the 1,500 brave soldiers who died in that effort.

Examples of his signs:

...more evidence the real objection to the war in Iraq is that the Left thinks all war is bad.

...the mission is not accomplished yet, but is any one except the un-reality based community still calling Iraq a quagmire? 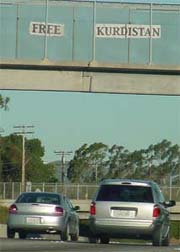 That last one is a doozy, since we liberated Kurdistan years ago. Oh, wait, he means liberate Kurdistan from us. What a patriot. Meanwhile, the Lebanese post some of their own freeway protest signs:

And what are other Lefties saying? Oliver Willis: "1,500 American lives. For what?" Er, see elections in Iraq, Egypt, Saudi Arabia, Lebanon, Syria...... UPDATE: OW gets spanked!!! Mathew Gross: "Not worth it. Not worth one." This guy blames the US for the Hilla terrorist bombing. That wouldn't be like a Lefty--you know, blaming the US. Lefti: "I'm waiting for someone to count the Iraqis killed just since the election - surely it's approaching 500"--and I'm waiting for Lefties to stop supporting tyranny in the name of no-war. Atrios, to his credit, simply say's "Rest in Peace" (ht: Wonkette who manages to leave the word 'ass' out of a post for once) Rob also on the scene
Posted by: Rusty at 12:38 PM

1 This is why I don't visit the leftosphere. The effects of the blinding rage on my blood pressure can't be good for my health. Thanks for doing the dirty work so that I don't have to sully my browser with their vomitous (sorry!) bilge.

Looks like the LLL media elite got together in the backroom and decided to allow a slight, grudging change of tone by admitting there are some positive aspects about the uses of the US Military, and perhaps, that a new wind is blowing in the Middle East. However, read the Guardian article, and be reassured that they haven't changed their true nature.

A Force for Good, by Robert Kaplan/NYT http://www.nytimes.com/auth/login?URI=http://www.nytimes.com/2005/03/03/opinion/03kaplan.html&OP=20bcd540/eqQ26We8Q5C)YwQ5CQ5CbTeTaaKeaUeaUeQ5CBQ3EQ3FQ3EQ5CQ3FeaU0rBCrQ3F7RbQ2B
NYT
"The global war on terrorism has made the military far more effective at performing humanitarian deeds."

You're going to love this one.
Only the Guardian would make an attempt to credit Osama bin Laden with starting a democratic revolution in the Middle East.

The Guardian announces Osama started the The Cedar Revolution: http://www.guardian.co.uk/comment/story/0,3604,1429001,00.html

The Guardian:
"Has Osama bin Laden started a democratic revolution in the Middle East? One of very few universally valid laws of history is the law of unintended consequences. The effects of what men and women do are rarely those they intend, and sometimes they are the exact opposite. If that happens here, it would be hard to imagine a nicer illustration of the law."

They apparently really believe that the world is quite that stupid

5 Maybe, just maybe, if terrorists would only butcher liberals maybe then they would want to fight back.

6 No, if terrorists would only butcher liberals there would be no need to fight back :)

7 Cowardly is saying you care about human rights and ending oppression while you watch innocent people being brutalized by tyrants and remain silent. You care more about seeing Bush and your country fail than freeing oppressed people and making the world a safer place. Try evading AAA fire and SAMs or being held as a POW in the Hanoi Hilton for about seven years or so before you talk about bombing being cowardly. Step away from the Kool-Aid kids and get a fricking clue! Oh yeah Free Tibet! But everyplace else oh well, we are to blame. More Kool-Aid please!

9 Right wing Cowards, sit back here in the States, while the rest of us fight your war. If your for the War join up you sniffling COWARDS

10 119 dath row inmates now free nationwide because they were found out to be innocenct and the crisis is growing please checkout www.innocenceproject.org thank you for your time