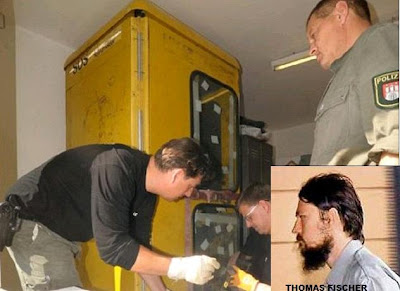 A man described as a ‘cold sadist’ imprisoned a woman in his home-made torture chamber rigged with eight bombs designed to detonate when he had finished with her.
[Photo credit: DailyMail] FOX

HAMBURG, Germany – German police were investigating Wednesday after a woman was apparently kidnapped in the northern city of Hamburg and kept captive in a homemade torture chamber. The Israeli woman made a brave escape from the soundproofed cell, made from a converted telephone booth, in 30-year-old Thomas Fischer's ground floor apartment -- fleeing when her captor forgot to lock the door and diving to freedom through a barbed wire-covered window

She's damn lucky she managed to escape. What the officers found sends chills up my spine:

When officers stormed Fisher's heavily fortified apartment, they allegedly found a pistol, a hand grenade and surgical equipment including a scalpel, syringes and gynecological tools with which he had experimented on a mannequin[...] A police spokesman was quoted as saying, "The whole two-roomed apartment was rigged up as one massive torture chamber, with this big old-fashioned telephone kiosk soundproofed as the cell for his victim." The police prosecutor said, "It is evident that the apartment was meant as a place of confinement for some time."[ More]

Friday night continued to be Thomas F. projects. Armed with a pistol, he went to the apartment of his victim. The young Iranian woman who had met the man about a work colleague opened the door unsuspectingly. Then the man pulled his weapon and kidnapping victims be so in his apartment. What the woman saw there, she must have panicked. Located in the living room of his small two-room apartment for which he pays about 400 euros rent warm, the 30-year-old had built a soundproof dungeon. Apparently the woman should take the captivity in which only 50 square meter apartment for some time.

Thanks to Black in comments
Posted by: Stable Hand at 10:59 AM