On suspicion of bomb making

..The three German nationals will be arraigned on charges relating to a bomb. The arraignment will take place in federal court on Saturday in Karlsruhe. Officials said the arrests took place in the state of North Rhine-Westphalia where the men were suspected of preparing a bomb to be used in a major terrorist attack.[More]

This German news site stated the three were Moroccans

The daily Bild reported that the three were Moroccans living in the western German state of North Rhine-Westphalia and were caught with "large amounts of explosives"[...] They came to the attention of the Federal Crime Office during surveillance of mobile phone and computer communications. Bild identified them as Abdeladim K., Jamil S. and Ahmed Sh.[More] 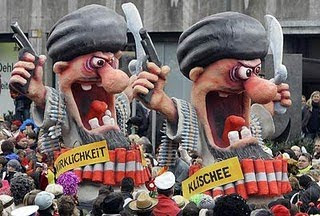 From Eric Dondero: Dusseldorf-City in Germany Known for Offending Islam Target of Attack

Though, there is no motive released yet for the attempted bombings from police officials, Dusseldorf has a large Muslim community that frequently clashes with local Germans. The city hosts the annual Carnival of Rolling Caricatures (photos above). In recent years, the city has come under great criticism from groups on the left for allowing parade floats of what are considered offensive depictions of Muhammed. The German Board of Muslims criticized the “presentation of religious leaders Islam"(Source: Petaflop.de)[More]

I think those floats are cute, but that's just me.
Posted by: Stable Hand at 02:31 PM