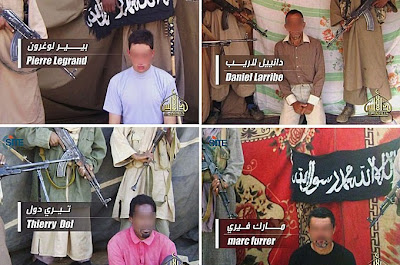 Al-Qaeda's North African arm has released a video showing four French nuclear workers kidnapped last year in north Africa urging France to pull its troops out of Afghanistan. A copy of the video, distributed on Tuesday by SITE, a US-based terrorism watchdog, shows a series of photographs of Pierre Legrand, Daniel Larribe, Thierry Dol and Marc Furrer with armed men standing behind them. Over the photos is recorded an audio track that appears to be the men reading a prepared statement, one by one. "We urge the president of the French republic, Nicolas Sarkozy, to respond positively to al-Qaeda's demand he withdraw French troops from Afghanistan, as the French have really no interest in the war in Afghanistan," they say. According to the voices, the recordings were made on April 11, 12 and 13. Reacting to the video, Laurent Wauquiez, France's minister for European affairs, told the French news network BFM-TV that Paris would "not allow its foreign policy to be dictated by kidnappers".

Not good. Prayers they will be released unharmed and returned to their families..sigh UPDATE: Video: Previous: AQIM to hostages, say cheese