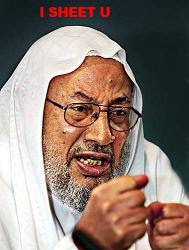 GhonimI loved Sheikh Qaradawi Khutbah today. Was truly inspired when he said: Today I'm going to address both Muslims and Christians. Respect! about 20 hours ago

Respect my arse, also in Arabic:

The pleasure of the presence of a sermon of Sheikh Qaradawi Today, more than what I liked where he said: I will not say but I will say O Muslims, O Muslims and Copts, because you are all Egyptians

He left out this (via AmericanThinker]

MEMRI is so far the ONLY organization to report/translate the Qaradawi statements beyond merely opening the Rafah crossing -- ie. his call for the Jihad re-conquest of Jerusalem, was conveniently omitted by the MSM and Arab media accounts

Ghonim conveniently left it out, didn't he? I tweeted him regarding Qaradawi's statement: @Ghonim :loved Sheikh Qaradawi Khutbah today. Was truly inspired <-did this-->http://bit.ly/f3iF5D (American Thinker) inspire u 2? about 15 hours ago Didn't tweet back....coward Update: ADL has the best background on Qaradawi, although it hasn't been updated with his welcome back to Egypt

"I support the Palestinian cause. I support the resistance and the jihad. I support Hamas, the Islamic Jihad, and Hezbollah. I oppose the peace that Israel and America wish to dictate. This peace is an illusion. I support martyrdom operations." July 12-14, 2007, speech at the conference "Imam al-Qaradawi: A Forum for Students and Friends" (MEMRI) Although Qaradawi has condemned the murder of civilians, including the September 11 terrorist attacks, he supports terrorist activities against Israel. In his condemnation of the September 11 terrorist attacks, Qaradawi claimed that "such martyrdom operations should not be carried out outside of the Palestinian territories." Qaradawi justifies this stance by claiming that Israeli civilians do not exist because the Israeli government requires all citizens to serve in the army. In 2009, Qaradawi reportedly allocated $21 million to Hamas to buy apartments and plots of land in Jerusalem to "build charitable institutions to broaden its base in the city," according to the Israel Security Agency Shin Bet. Qaradawi previously transferred tens of millions of dollars to Hamas directly through the Saudi-based Union of Good, an umbrella organization of over 50 charities worldwide headed by Qaradawi.

On October 12, 2010, through a recorded message played by the Hamas-affiliated Ministry of Religious Endowment in Gaza, Qaradawi told guests at the meeting that Palestinians must continue to raise arms against Israel. According to Gazan Radio station Al Aqsa Voice, Qaradawi stated: "Not one inch of the land of Islam must remain in the grasp of infidels and occupiers…We must irrigate the tree of freedom with our blood. We must not leave the Palestinians alone. Every Muslim fulfill [sic] his role supporting our brothers in Palestine until they obtain their rights." He reiterated even more clearly, "Arms must not be laid down—he who wants freedom must pay the price." Several days later, on his weekly "Shariah and Life" television show on the Al Jazeera network, Qaradawi was asked by the interviewer if Muslims should attempt to acquire nuclear weapons "to terrorize their enemies." Qaradawi, noting his pleasure to learn Pakistan had such a weapon to defend itself, replied that this goal would be permissible for Muslims and provided religious justification for "terrorizing the enemy." Qaradawi also has a long record of inciting violence against Jews.[ More...]