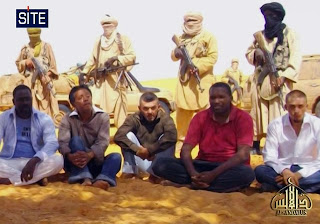 SITE
Al-Qaeda in the Islamic Maghreb (AQIM) has released a video showing hostages they kidnapped in Niger.

DAKAR, Senegal (AP) — A tape released Thursday on a jihadist forum shows the first images of a group of hostages including five French citizens since they were seized two weeks ago in Niger by an al Qaeda offshoot and taken into the desert. The four-minute tape shows still images of the hostages sitting cross-legged in the sand with a gently sloping dune behind them. French officials believe the seven hostages are now in the bordering West African nation of Mali. The hostages were grabbed in the middle of the night on Sept. 16 from their guarded villas in the uranium mining town of Arlit in Niger where they were working for French nuclear giant Areva. The French Foreign Ministry said the tape was encouraging because the images show the hostages alive.

Giving in to terrorists demands=more hostage taking. AQIM make monies this way. Not that I don't have feelings for those who where kidnapped, I do. I pray daily for their safety. Someone has to hold the trump card, but it shouldn't be AQIM. Just sayin. Thanks to Mean Kitteh Previous:
France Accuses Spain of Financing Terror Through Ransom
AQIM Claims Abduction Of French In Niger
Posted by: Stable Hand at 01:03 PM